We are not unhappy to leave today for Pakben, a town halfway between Luang Prabang and Huay Xei on the Mekong. Our boat is narrow and slender: about thirty meters long and four wide. It's all teak, the sides are open, to discover the landscape. Wooden benches are arranged in shares and other (and anyone who knows how to write of "shares and other" to make themselves known!) We understand why we saw vendors with soft cushions at the pier. In fact, our "slow boat" looks like a subway train, which are mixed mostly tourists of all stripes: the Laotians who will do business, others are likely to seek treatment at the hospital in Luang Prabang . 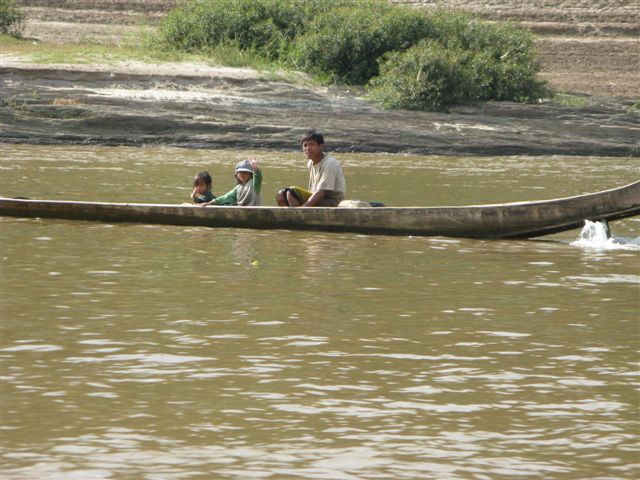 I pity the poor kid that his father has with great difficulty in his arms. The kid is certainly a fractured leg and wears a kind of crumpled plaster should not be effective. And to see the head of the boy, his accident did not start yesterday. But if it dies on the way, we can always use it to lure catfish. Here they are nearly half a ton!

That's it! It is finally gone! "At eight o'clock in the Morning! "Saying! Well we left at noon sounded better. Our "Yangtze gunboat" commissioned by Steve McQueen in person blithely file its ten nodes in the meanders of the river. It feels nothing, neither good nor bad. The water is brownish (I see the green-orange) of large and strong turbulent eddies. However, the bed is far from full as we are in the dry season. You can then slide between rocks or sandbanks. The rocks are disturbing, prominent, and appear to have been planted vertically in the water like menhirs. Sometimes we shave Thailand, sometimes, to avoid an obstacle, we find ourselves on the banks of Laos, a few meters of the fishermen. These have real talent balancing act to stay in their long canoes. They have practically no draft. Fishermen use bamboo canes but we are going too fast to understand their fishing techniques. Some are launching huge hawks, others must fish with nets and zarouëts. Everything is peaceful, quiet. The banks are covered with foliage. Above, the cornfields. No birds. We have just seen a large white wading bird flying wing their upstream. Occasionally, one sees small cows in the middle of nowhere. Some even bask on sandy beaches. Sometimes, a few nonchalant buffalo come to drink on the shore.

The outside temperature is 30 ° and Steve McQueen, with his hands riveted to the steering wheel of his machine, leading us safely. By cons, no charming hostesses in pink tutu to tell us what to do if we leave the ship urgently. I do not think there's any life jackets on board our "gunboat." It will be "every man for himself" and too bad for the backpacks we stowed in the hold. 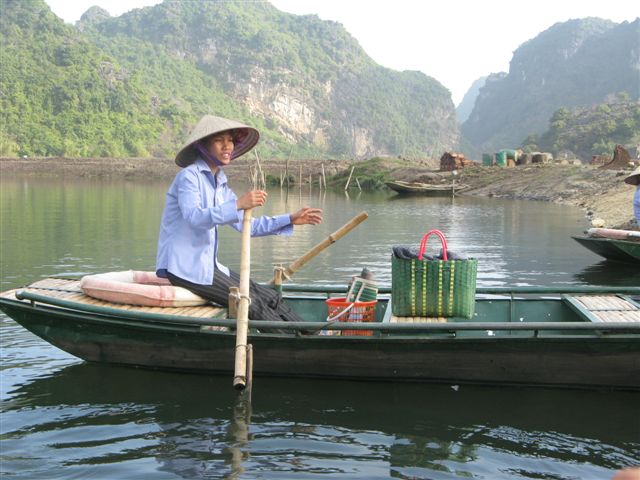 Round a bend, we drop anchor in a small cove used port.

Some small merchants boarded us to propose ribs buffalo sauce béarnaise "not spicy" with fries. (No, no, it was just a hallucination or the smoke from the cigarette bichnick behind me) Ah! The engine stops! Some silence? No! Kids come from everywhere carrying large baskets blue: "Chips, Coke, Nestea, Peanuts! "It is he who will board the first, more agile. All are barefoot and spin on the rocks like chamois. "Chips, Coke, Nestea, Peanuts! "The prices are great no matter what you say but that made people happy and there are many tourists who buy. The descent is long and failing to watch a DVD or watch the latest episode of "Plus belle la vie", it deals with food!

We leave. A little further, we see miners. Armed with a bat, or a flat (I know how to say!) They search the bank and are constantly seeking fortune. I hope to meet them tomorrow ...

The descent continues. Currents are sometimes strong. Is shaved at top speed very dangerous pitfalls. We tell ourselves we'll be ambushed. The Viets lurk there, behind the hedge of palms. Loaded their blowguns with poisoned arrows in liver tarantulas. But Steve McQueen felt the danger. He dodges a protruding rock and releases the gunboat which takes its bearings in a raging Mekong. The road back downstream. That's it, we have avoided confrontation and we sail again in friendly territory.