Waking up too early morning. We dare not go out into the street to see the procession of monks do the quest. We fear to wake Mr. and Mrs. Pouthen who sleep in the hallway. We drive to a cyber cafe to meet the mail and answer all our dear friends who write to us.

Then it's off to visit the temples. What it looks like the Pho Thai but smaller and more authentic. Luang Prabang is a city "holy". Indeed, Buddha came here to meditate and say without doubt that the prime rib with béarnaise fries were certainly good. He also said that my idea on the issue was vital, even existential!

Wat Xieng Thong temple is an activity. The monks in orange sarong come and go. They are very affordable though some do not want to be photographed. They are mostly young and you talk about the latest exploits of Arsenal between two philosophical explanations. They study different languages ​​and learn fundamentals of Buddhism. They enter the temple at the age of ten years and come out after several years, as they have seized more or less rapidly the principles of meditation. Some monks remain two years, others for decades. (Has it it which include fast but should explain long!) In a small space were erected several temples including the oldest dating back to XV century. All are richly decorated with small mirrors of all colors depicting scenes from the legendary life of Buddha. "Buddha speaks with the Elephant", "Buddha and all his friends will gather fruit in the forest," "Buddha transformed into flower arrows that launched him very wicked," "Buddha by meditating under a tree with his buddy monkey "... Briefly, full of stories of Buddha, like Martine. All that, it makes very nice frescoes we admire despite a drizzling rain that we were no longer used. 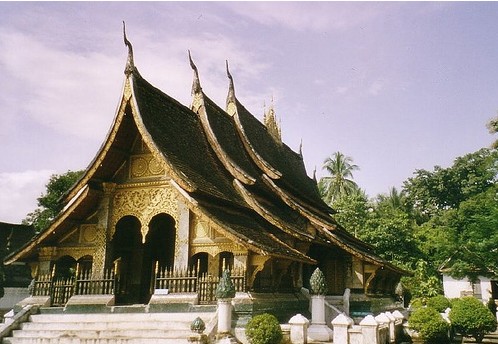 It obviously takes off his shoes to enter the chapels dedicated to Grandpa. We prostrate, we burn a candle or some incense, it makes an offering - a rice ball, a bottle of alcohol, cigarettes, flowers ... - And it especially does not feet first. This Buddha is strictly prohibited and may get angry and then we could have lots of problems ...

We have spent the morning we follow the broad philosophical theories advocated by the "Almighty". A young monk of Wat Mai allowed me to photograph his cell. It shares a space with a boyfriend of four square meters. A bed-bench on each side, some cooking utensils, a radio, the sacrosanct mobile phone and lots of posters of footballers taped to the wall. It disappoints you, huh?