After a night as hard as the mattress, the famous Sayan came to pick us up at our hotel. Sayan bartender, cook, owner of several hotels, taxi drivers, bus, descrambler for the Lao visa and especially brother to him who does the same thing, but in Laos at Huay Xey. After waiting some time we have conveyed to the pier where we took the motor boat to cross the Mekong River, less than a minute. This is about as wide as the Loire to Nantes. 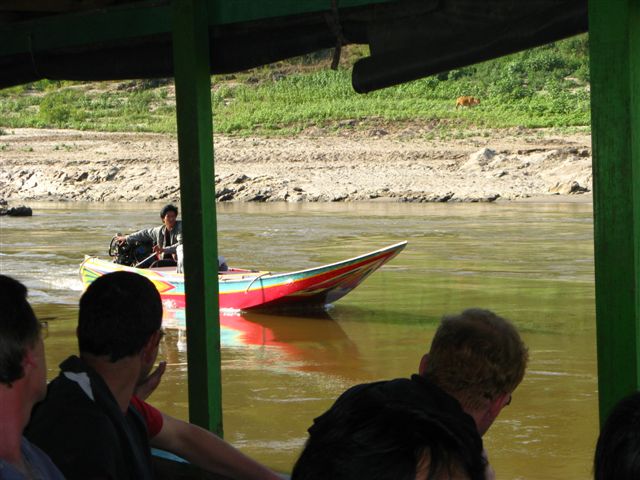 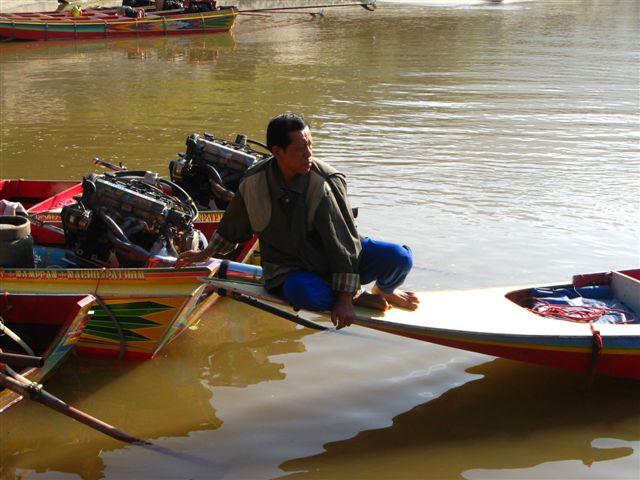 To obtain the visa, it is a little obstacle course. All nationalities backpacking can be found on the shore of arrival and seek to understand how it is done. It's a happy mess. The customs chief takes your passport, entry visa glue, retrieves the photo and you spend $ 30 and then to buffer! And I am amused to mess up when I announced that I had paid my visa that price (23 €) as we were with other French people who, themselves, had the bad idea to buy their visa in France at 120 €. There's matinees that begin well, sometimes! 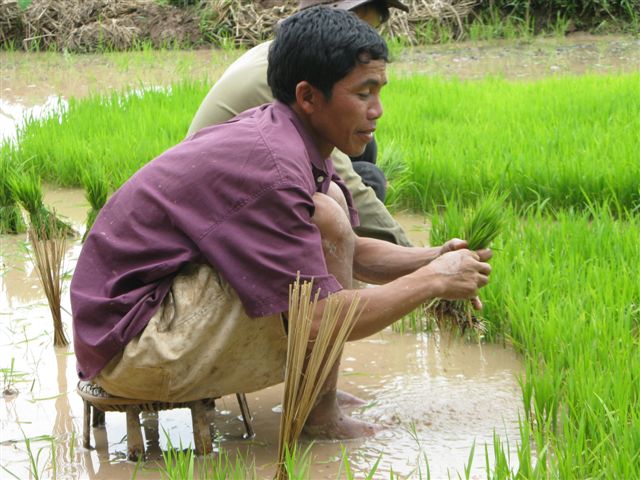 Sayan's brother was waiting for us well on this side of the border. We loaded the bags into his van and we headed for Luang Namtha about 180 km from Huay Xey.

Well, the Sayan is a big liar because the road is completely rotten. Will tell the DDE Danielo not to buy this type of coating. The road is completely screwed and you have to zigzag to ride without too much chaos. In addition, there must be a million turns. Dust is everywhere. It covers all the leaves of the trees along the road. In fact, the trees are red, the earth is red, the red road and the houses are red. So I summarize: in a minibus with eight (six Israelis, one Thai and two Bellilois) Lao music or his sister Georgette Plana thoroughly brushes, you drive three hours to the climbs and a little more on descents and, especially, you're avoiding stray dogs, small misshapen black pigs that live on the road, goats that roam, children who are dry branches of broom to brush, the bikes that roll n 'anyhow, tanker trucks that roll almost backwards on the climbs, dust, holes, potholes, falling rocks ... It took four hours to reach Luang Namtha. It is located in the mountains, on a large and wide plateau. The vegetation is really lush. I even saw lots of cocoa pods. (Actually, I knew that it was well after papaya) forests were probably devastated. You do not see a single large tree. Some photos taken in northern Laos show that hundreds of thousands of hectares of forest have disappeared, leaving a true desert.