Finally! It was a night about right. I would still have liked to have a gun to make me the hens and roosters who started yelling at 5.30am. And then, the doves have taken over ... and finally, a Thai has turned his truck for half an hour in front of our garden. Maybe he wanted to defrost the windshield before starting his tour?

We went back to the motorcycle shop, bouquet in hand. The problem is that we did not find the store in question. Finally, it was no longer safe! It must be said that the streets of Gold Clock Tower in Chiang Rai, stores motorcycles are as numerous as the stores kitchen at the entrance of Nantes! In short, we chose one that seemed to be right. We entered, greeted by vendors and sellers. What puzzled me was that they were all dressed in red, gold, yesterday, the employee who took us to the "Computer Service Center" was dressed in white. We thought maybe they changed the dress and color every day! As the big boss was not there, I left the bouquet as a thank you and, just in case, I asked one employee if he knew a good plan to visit the hill tribes living around Chiang Rai. Immediately, he called his uncle driver and touc-touc 500 baht, it took us to the ecovillage in the region to meet people for less "extravagant". 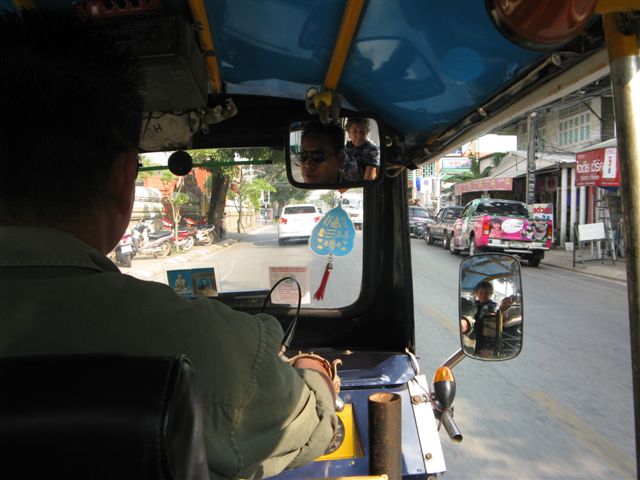 One is first past the driver's aunt who lives with an old and sickly Switzerland then we got in Yaho, Lahu, Akha and Karen. Admission: 300 Baths per person. It helps the whole community. And there, we entered another world. 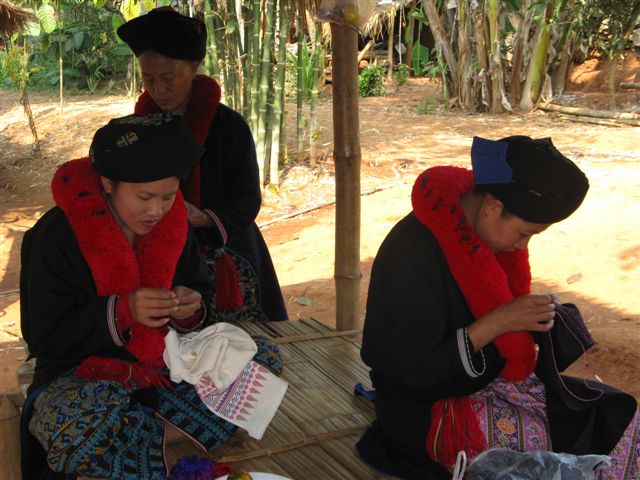 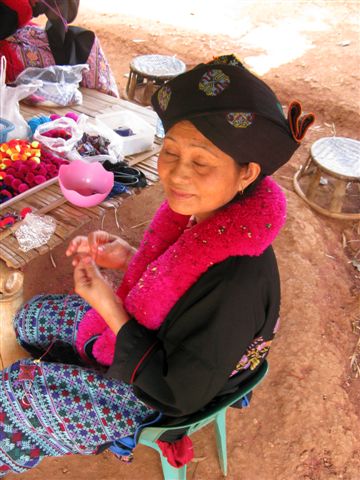 The Yaho are very warmly dressed. They wear colorful costumes and going about their business while trying to sell you crafts. They danced a "Laridé" well at home, in his "bamboo drum" and "pan flute Ocarina". We laughed when Martine donned the costume room and began to show them how we danced the "andro" around here! We continued our way to the Lahu. They wear a kind of liquette blue embroidered multicolored designs, a huge hat on which are sewn silver coins and bells. And not to be cold (you never know), a beautiful red scarf with large tassels on their envelope neck. Their teeth are damaged because they eat betel (kind of appetite suppressant producing a reddish juice ... And we keep telling them not to talk with your mouth full ...) They have specialized in the size and sculpture bamboo. They make all sorts of items including teapots and cups they sell at a ridiculous price. 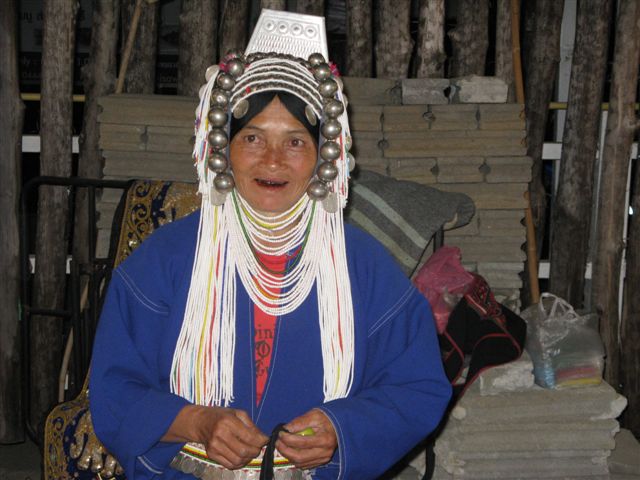 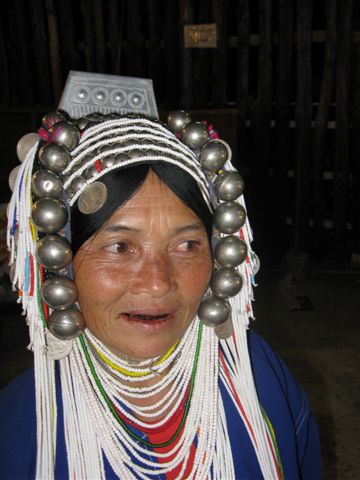 The children are adorable and follow us everywhere without begging. We were disappointed not to have some explanations about their lifestyle, but we could still visit their habitat. Here, bamboo is king. Those wanting more information can go on the internet because I'm not going to require a course in anthropology at 22:00, when I'm in my bed. Resuming during this wonderful story that takes us now into the Lahu tribe who welcomed us with dances and songs typical of the country. It circulates among the hens and dogs all thin skinned and the villagers are really smiling. Here are grown ananassiers (or pineapple) and coffee.

I forgot to tell you that only women wear traditional dress. The men are dressed like you and me, how Thai XXI century ... but hey, this is not the Ralph Lauren either!

Finally, we met the famous ethnic Karen. Well the "giraffe women" do not exist only on TV or in books of social engineering. Karen, they worked alongside! I lent them my binoculars: they were amazed to be able to monitor the neighbor who lives a hundred yards but was not aware of it. The Karen Women-or-Giraffes do not eat betel. Their teeth are perfect and would make green with envy our beautiful European goddesses. But what differentiates the Karens of our beautiful goddesses, it is not their teeth, it's their neck! From the age of three years, girls wear a heavy necklace of metal (perhaps silver plated brass) and each year we add a ring to the collar to stretch their neck! In adulthood, the necklace is more than 4 pounds and measuring 20 to 30 centimeters. 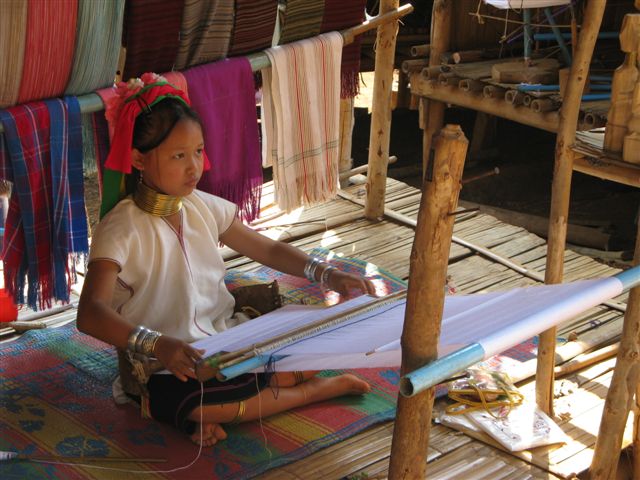 We obtain women's disproportionate neck. They obviously can not remove their head collar because their lack of "guardian" would rock. Death would probably be faster. They should therefore be very careful when they sleep. They use a small stool covered with a kind of pillow to keep head in the right position. Only women wear the necklace. The men, nothing special! The women working on looms. They use some sort of spinning wheel, cattails and weave beautiful colorful scarves. They are very affordable, smiling ... In a word, proud carriage due to the collar gives them disproportionate presence and a nobility that I have never encountered before. And as they wear the clothes they confectionnent with all these colorful son: they are really beautiful!

Around the corner, we found a school built with bamboo. The tables are bamboo benches also. Only the big blackboard and chalk reminder that we are in a "sacred." The school teacher working for fifteen children from three to ten years. Everyone has his notebook, his alphabet. All learn Thai, English and especially the basic principles of their ethnicity. Some children are dressed to the "European" but others wear traditional dress. Some girls also wear the necklace that will make them later, authentic women-giraffes. 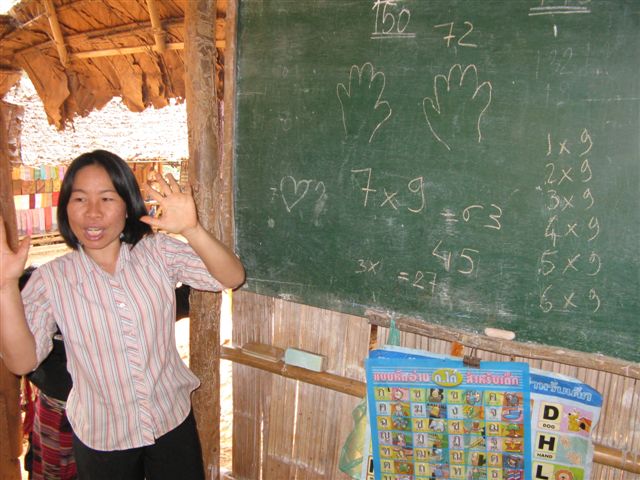 We obviously went into the class that has no door or window since it has a roof and four posts. All we have very kindly received. I explained that I had just France ... and I have taken the place of the teacher, completely dumbfounded. I then explained to the elderly how to get by with the daunting multiplication table by nine. In five minutes, everyone understood the trick! Then I showed how to play "scissors, rock, paper, well" with the mistress. When we left, the lady was still stunned! And children began to play alone in "scissors, rock, paper"

All that to say that the Karen, they will not forget me !