Accueil >
Blog >
Asia Travel Book >
On board of the Discovery!

On board of the Discovery!

The Discovery jutting into a bay. We descend on a dock made of bamboo. A cliffside cave a giant. We accessed by a steep staircase. And here we are suddenly in a new element. It's "Journey to the Center of the Earth." Thousands of stalactites ... and "gmites" rocks in curtains, cream puffs, stones that seem to flow the molten ceiling of the cave. The Vietnamese have built dozens of lights to catch the eye. Most Asians who come here are even more impressed by the mountains of the bay.

The guides, which have much imagination, to tell tourists all sorts of adventures to witness some rocks whose form recalls an animal, plant, or even Mr. Emperor himself! 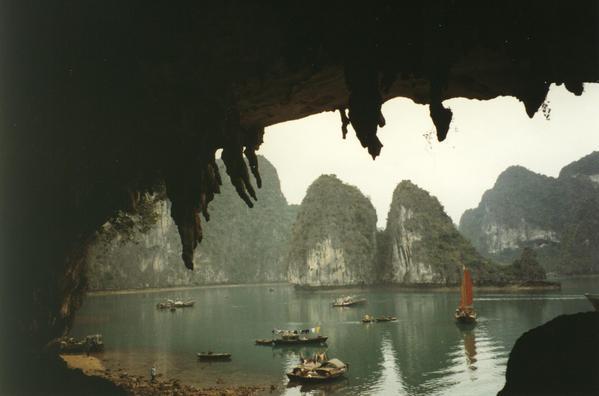 There is a very long time, the King brought his seven women in the cave so that they bathe in a pool with fresh water. Once naked, these are the damsels who dabble. Meanwhile, the King went back to work because ... "It's not everything, but I have a job! "Between then in the cave a poor fisherman who took the opportunity to get an eyeful and prick all the clothes of the bathers. It's not pretty pretty, is not it! When the girls leave the water: misery!

"Where are our clothes? The King will not be happy, for sure! "

And now the King returning from work to use his wenches. He arrives on horseback in the cave and hang it on a stalactite lying around there.

The King gets upset so many he kills her outright seven women. This is the King, he laughs not:

"Me do not care, he said. I will buy seven new wenches tomorrow. "

But any anger past, he said he went there a bit much. Now he regrets ... Meanwhile, the seven girls left in paradise, naked, and all the inhabitants of paradise can get an eyeful, especially since they are really gun, the cute!

Then the King, remorseful leaves his horse in the cave and goes off with him.

"I'll let my nag in the cave, like that, if girls revienennent, they need only get it to come home. "

Must be said that the king had a great horse to seven seats plus the driver.

Ladies and Gentlemen! So you can see on this wall the horse of the King who is still waiting damsels. And at the foot of the wall: the puddle.

You still have not much to tell a story to Pierre Bellemare!

The day is thus continued in the tide, fog and furtive passages of the sun.

Arriving at an island, and anchored the Discovery cut his engine. The sun sets. I catch the last rays for a kayak ride. I walk around the island with a core of Robinson Crusoe. How calm! Back by a small fishing village: people here are called "men of the water." 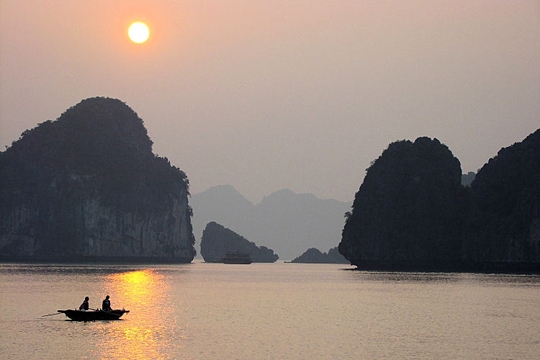 You not forget moments like this. Kayaking, at night, in the maze of islands of Halong Bay ...

In the evening, we meet two maidens (dressed, and not on horseback): Natalie and Celine. We sympathize. In the evening, you find yourself all on deck. I take the time to tell "The Third Race"! Martine torch half a bottle of vodka and went to bed in the fuel vapors. Well! It's clean! ... and I stuff myself with Aspro!