Accueil >
Blog >
Asia Travel Book >
On the Road to Laos

On the Road to Laos

Lets go to Laos! We left Chiang Rai and is currently on the bus that takes us to Chiang Kongh. En route, we crossed the convoy of the Prince of Thailand, as Louis XIV during the great plague of 1709 throwing handfuls of shield to his people s hungry. Cops everywhere, army, helicopters, schoolchildren in uniform, flawless, the small Thai flag in hand.

Life is concentrated along the roadway. The houses look like our little Swiss chalets. The bottom is usually concrete, everything else, above, is made of wood. Farmers practice the burning and we could see many rice fields dried up and blackened ash. Bananas grow everywhere but it should not be the season of bananas because I have not seen one. The Thai government has decided to replanting teak trees, huge trees that were unfortunately all turned into garden furniture and parquet to the delight of Westerners that we are. So we find plantations around young teak and as the queen herself has taken matters in hand, nurseries are almost sacred. We saw also coffee and all kinds of fruit trees. 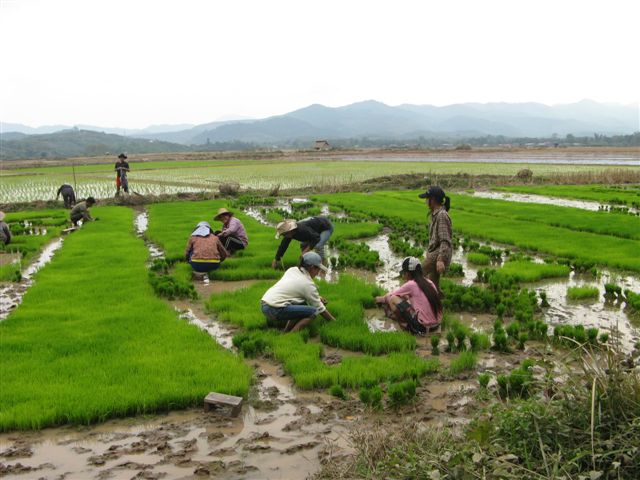 Once there, we took a touc-touc to get to the hotel Siam whose rooms have views over the Mekong. Lots of boats operate from small, for, big. Passenger transport, commercial transport, trafficking of all kinds ... The water is murky, calm, but the current must be consistent. It's quite the image I had formed. After contact with the owner's uncle, a man named Sayan, we organized our next 48 hours or more. He takes care of us get our visas for Laos, he picks us up tomorrow morning taxi to the pier, we cross the Mekong Elephant (no, I kidding!), We arrive at Huay Xei , we take a mini bus to Luang Namtha to the north with four Australians and we will then try to push northward to meet the cannibals, the head gear and the handlers of cobras. Martine shakes ... but she already knows she will not stay there long, long time ... 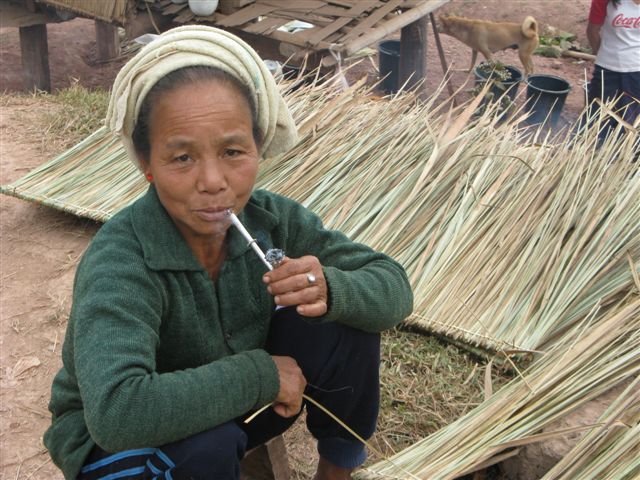 In the afternoon, we made a short tour to explore the city which seems to boil down to a great central road lined with houses and shops of all kinds.

That's when we heard the following announcement, vociférée the megaphone:
"Ladies and Gentlemen! Here tonight, in the school stadium, right next to the temple! Great night of music with Georgette Plana and his chamber orchestra Portuguese! Y 'will crepes and cider! Come! Spread the word! "

So we decided to attend. The group that occurs must be known because here everyone is talking about it. We'll see.
Meanwhile, I came face to face with Annaïck Duliscouët, the market of Chiang Khong pancakes. Neither one nor two, I started before the Billik, (galettoire for the Boeotians) the Rozel (a spatula to turn) in one hand and a ladle of batter into each other ... and I've turned two chocolate crepes. I missed it, make pancakes!

In the evening we went for a ride on the side of the festival. My first idea was correct: it was Georgette Plana and his chamber orchestra Portuguese was happening. A huge stage, a huge sound system, a world impossible. Everything sponsored by M, a kind of local Red Bull. We therefore avoided Georgette - it was like music "Booliwoodienne" - and we got into the shopping extensively. Annaïck were reviewed and then we stopped to admire the "popcornier." It's worth the look. He puts the seed corn in a huge basket in perforated metal. It suspends after a long handle that shakes nonstop over a fire until the popcorn have inflated. Some caramel on top, small plastic bags for sale .. and voila! Should think about doing it during the summer at Belle Isle!