Puppet theater on the wate

Morning awakening and becomes habitual. No time to relax! It's raining, I would even say: "It craquamouille! "(A kind of drizzle that you soak in less than a minute). We take a hearty breakfast in the restaurant of the junk. Gradually, the rain clouds dissipate but not the mist. We pass through the maze fabulous islands of the bay and measure our chance yesterday. Those who make the same journey today as ours yesterday will probably be disappointed and frustrated. They will not see much. Arrived at the port, we again restore a meal of fish and soup with rice, cabbage, tofu and fries!

The return trip by bus is a general silence: everyone is asleep! ... despite the infernal noise of cars and trucks that cross in all directions in the middle of potholes. We find our hotel Violette and tumultuous world of ants and rolling klaxonnantes Hanoi. And we realize how much our scenery in Halong Bay has been good, but unfortunately too short.

We end the day at the famous Chinese puppet theater on the water. The room is relatively small and the seats more qu'inconfortables. Is that the Vietnamese are much smaller and much leaner than most us ... 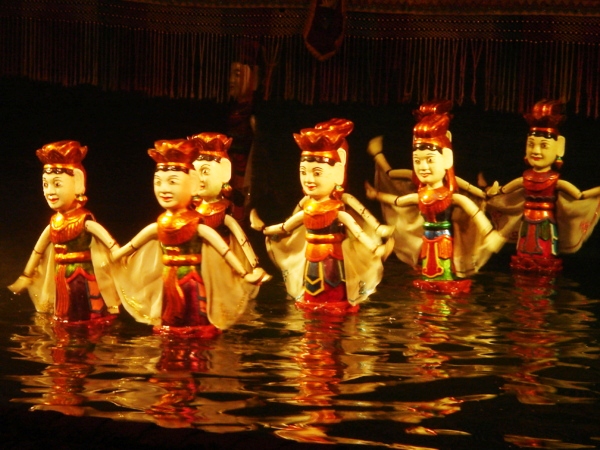 The show was very nice. Musicians in traditional costumes, singing, music, "the Vietnamese" puppets and superb operating in a large pool at the water's edge. Each is connected to a pole wielded by puppeteers hidden behind a screen. The decor is rather flamboyant and colorful. It represents the front of a pagoda bathed in a pool surrounded by gardens.

Puppets evolve his music. The scenes follow one another: the farmers who grow rice, fishermen struggling against turtles and dragons to catch fish. Dabbling ducks, buffalo led by farmers plowing rice paddies. A parade of the guard of the Emperor succeeded ballet dancers.

It was felt that this show was timelessness. Back on the street was well brutal. A short tour around the lake in the middle of which stands the "Temple of the Restored Sword" (Which program!)

We are so far from our daily lives ...