The Junk of Babel

Waking at Violette was not the most glorious this morning: 6:00! monthly with the sore throat that looks like a sore throat. + Meds meds and that's all muddy as we take a taxi to the "Bus Station". Direction: Halong Bay!

After four hours on a bus rather "pathetic" to weave between motorcycles, bicycles and cars, we arrive at the port. Upon our descent, a young challenges us and offers us a fishing trip in two days with a night at sea, aboard a junk. All for $ 90. Without much procrastinating, we agree and we find, after a long wait aboard "Discovery". And Discovery, in Halong Bay, a squadron y'en! Do not expect to find the junk teak with butterfly sails, loaded barrels of opium and rice wine .. The last, according to the Routard sank in the Bay in late 1999. No! Here we find the junk "Bénéteau," and only this: two bridges, which serve as a roof, a dozen rooms with water, electricity, bathroom and WC, and restaurant .... Karaoke disco when you get on. Finally, when I say room, we are far from Bangkok Shangrila! Ours is good four square meters. In fact, the bed takes almost all the space. And we already know that the night on board will not be easy: we are right next to the generator and fuel tank located just below our floor is far from watertight. God qu'ça stinks! Will not smoke in the square! Explosion hazard insured! But we will not complain, the dark red lacquer that covers the walls allows us to believe the space of a moment that we set off on an authentic junk that could have sailed on Marco Polo. 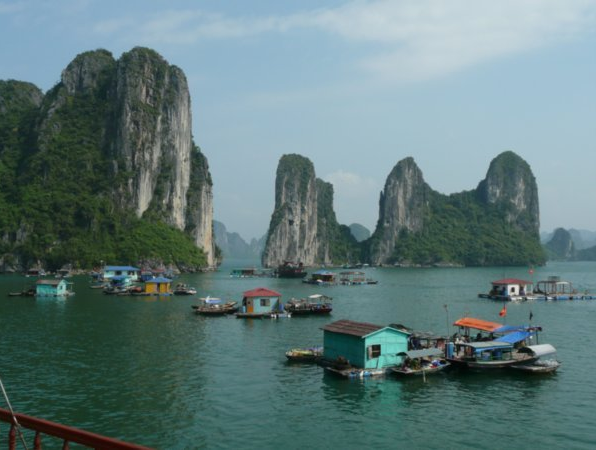 Here, all languages ​​meet and mingle; Some people who ride with us will not stay on board for a day and leave the same evening. Australians, Russians, Japanese, Americans, Chileans, Argentines, Israelis, French, Germans. Welcome to "Junk Babel"!

The Halong port? Well it's a port, like all the others! Aside from that here there is nothing but junks. And junks, y'en really. Ass facing the dock, ready to go, they are full of tourists in less than an hour. The "palangs" (in Vietnamese tourists) arrive by the hundreds of buses that arrive in Hanoi and are baked per package of twenty-five in the boat-hotel. And en route to this wonder berry.

However, we do not leave the dock "shrinking violet" The fog blocks the horizon. It would be absurd to have arrived here to see nothing. The junk slips on a muddy water. We encounter a lot of barges that transport the coal mined in the region. This coal is the energy depends Vietnam. The junks intersect in a pretty ballet. We can guess the first mountains in the mist and we are getting close, we take over the magnitude of what lies ahead. And like magic, the fog lifted and we find ourselves in another world. You see the Needles of Port Cotton Belle Isle?! And ben in Halong Bay, you are thousands! Absolutely amazing. Small, large, round. Ave of the cliffs, caves .. All are laminated to the base by marine erosion. Thus, they look like mushrooms planted in water. All these small mountains are covered with dense vegetation that compete for small goats. Hover above species of harriers, which hunt the fish. Everything seems frozen. The water is absolutely still. It is far from the tumult of the Mekong!

The junks cross by sliding between the islands. Some have weird shapes. We could detect liveliness of hens pecking, a bear, a pig. Y 'even those who say that one of these islands is the profile of spat Mitterand. (Has it it not that smoking tobacco, here!) The fog that is not completely dissipated adds to the enigmatic places. It has the power to you "zénifier" more ... Sometimes, the sun has just come out and offer new lights. On deck, the "Palang" who shot better-best. All photos are bound to be successful as the subject is easy to master. It's simple: everything is beautiful!