The idea of ​​the century, "a tour of Luang Namtha by bike! "Indeed, great idea until you find yourself at 2 km of bike hire and as you approach the first rib. Until then, it will still bifurcated but when you go to meet the famous tribe of Namdees, then you laugh a lot less. Growing and the road is no longer the pretty ribbon tarmac of the city. These are pebbles, small, and mostly large. Everything is connected: the pebbles at tires, tires to the frame, the frame to the saddle and the saddle to your buttocks. In short, the horror. You can imagine how our great-trains were after thirty miles of "corrugated iron"! Compote! You see the monkeys in the zoo in Vincennes? What have those pink and protruding buttocks to excess? Well that's us! Here, we really suffered and it will certainly be several days we recover. Already we had spent the night on a special mattress with reinforced springs destroyent you back ... but like the hero of the Tour de France, respectful of the fight against doping, we have not wavered and were chained in the same day the Tourmalet, Ventoux, Aubisque and cobbles of Paris Roubaix. I think my bones are still the brand of the saddle. As Coluche said: "Gotta be dumb to ride a bike! The proof? It's always the Belgians who win! "

But back to the test day. We passed through villages built along the way. All houses are built on the same model. Piles to obtain a ground floor open to the winds. Above a floor. The walls are made of palm leaves, wood floors of teak and bamboo, the roof is made of woven reed leaves. The houses are at most six square meters. People live without. Tribe Namdees is probably the poorest of all those we have seen. The small black pigs wander freely, calves too. We see a buffalo occasionally stashed in a wallow. The dogs all look lousy. They're ugly as hell. It gives them nothing to eat: everyone must fend for themselves. So are they for bins. When they are a little fatter, they move to the pan. This is very good with baby vegetables, rice and a good sauce ... Otherwise, hens, roosters, chicks, ducks, turkeys, cats and a few butterflies complete the picture. Amid all this traveling menagerie motorcycles. They run one, two, three, four, the record belonging to the family Duraton with six people. The small on the handlebars, the mother behind with the baby in the back, Grandette the middle, the elder and the father that leads behind. No helmet, no gloves: everybody barefoot or in flip flops. This raises a dust that you can imagine without difficulty. The motorcycle crossed occasionally small trucks struggling to climb the hills. Tractors will be added. Finally, it is not tractors. These are species of lawnmowers with front engine and a long handle. People cling to a kind of "garichelle" (a trailer, my breath for non Bellilois Martine). It's been a lot of noise and smoke ... You will doubt that here, there's no license, no insurance, no technical control. And since there's not a cop: what is the fair! 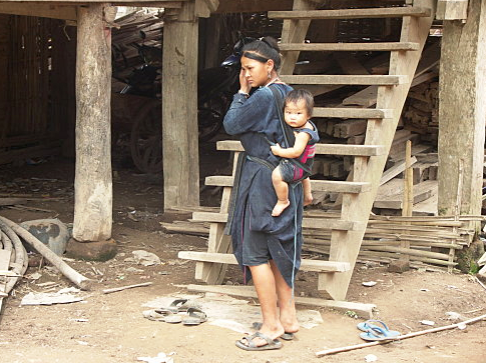 In the first village, we met young people in building a house. I approached and I took some pictures. The children came in their turn, and I showed them my pictures. It made them laugh. So I pulled out my computer and I showed them pictures of Belle Isle. None of them had never seen the sea or a ship. If one day I was told that I would discover the Belle Iloise Namdee to Luang Namtha ... Everyone has stopped work. The girls stopped braiding the leaves to make the roof an old lady offered me his pipe in silver, the boys were standing behind me, small sitting cross-legged, babies in arms, dog full of fleas coming you make léchouilles and I showed them my country. The comments were rife ..

We are then left to visit the Waterfalls. Not enough to extend ... Return to re-stop in Namdees. All children have returned to our side and I offered a course in origami (paper folding). I do not think there is a school here. So to find the paper ... They offered me the "bamboo paper" they are themselves but it was too soft! Finally, Martine has torn a page from his notebook and I was able to make "paper dolls that flap their wings when they pull the tail." Too much!

We went back to visit Tongdees. Beautiful spacious houses of teakwood, a large yard dirt, dust and always the same and even to color the whole menagerie. They seem to be much richer than Namdees and more "cleans". We stopped in a small semi covered market, history of eating two tomatoes and orange juice and we got ripped off cleanly ... but who cares! (To follow)