The prison of Hoa Loa

A good night at Violette, finally! We go have breakfast at our little baker makes you cream caramel and coffee 0.12 euro which resembles something. The price here is really anything. Coffee prices should vary according the official established in Hong Kong or Rio. You think in 3000, 5000, some 10,000 Dong. The more we found was 26,650 Dong! At this price, you think they're gonna put the little chocolate cake packed and of Pont Aven small bonus. Do you? This is the same ink. Once heavily watered and sweetened milk Nestlé Sweetened box, you can drink it.

Coffee finished we headed to the train station. We decided to get a refund because the tickets we opt for a stop in the city of Ninh Binh, Halong Bay called Earth. A program ... provided that the time is not in the fog. It is a risk worth taking because if we will not see fog practically nothing in this area considered as a Backpacker beads Vietnam. Arrived at the counter, we do pay with a loss of 10% of the ticket price.

While we were preparing to leave, a "leader" and the employee arrives back ... he pulls her hair swinging on the table received from the local station:

"You saw what you did? It is you who will pay for the mistake. "

The employee stoically said nothing.

Tight smile on our part. When we leave, the "leader" still pulls the hair of his subject.

Will do it in France! As they say: "Other places, other customs! '

Since we had some time before we decided to visit the notorious Hoa Loa prison in the heart of Hanoi. Martine, who read a lot of things in the Backpacker and having had some echoes "sordid" of the place, opt for a visit to the Pagoda Ambassadors, much cooler than the prison .. I therefore only visit Hoa Loa ....

The prison was turned into a museum but the Vietnamese have done things. When I say "well done", I mean, they interpreted the history of the place in their sauce! If I summarize their saying: "When the prison was ruled by the bastards of French settlers, it was hell. And when we, Vietnamese, we took possession after the departure of France and we are incarcerated Americans, it was paradise! In fact, it is a place of misery and shame for humanity. Here, the French parked, tortured and executed hundreds of Vietnamese. They were themselves caught in dormitories on the ground. A foot impeded, the sloping ground so that feces slide to the bottom of the cell. A sudden jet of water it twice a day ... It was not that the Moltonel at the time of the pre-war world, not even in the small faucet or the hose. It was thus jails containing sixty prisoners, lying next to each other, themselves caught in a dark scary and odor can not be imagined. 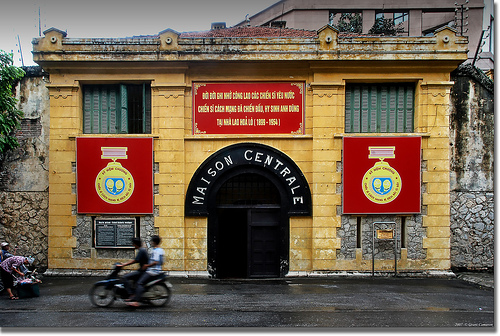 The next room was the torture room. We see refunds "to the Viet." In the same room, "not torture" who raise their fists and singing while at the International center, tortured two poor are beaten, tied to ladders. And then at the bottom, the "already tortured" who are dying without speaking, of course. On the other side of the prison throne guillotine, the only one still visible today in the world. Abject! Sordid! You wanna puke and fuck off. I do not even dare to say that there was also an area reserved for female prisoners. A single point of water for two hundred women! In windows, it shows you the objects with which they were tortured. I will say no more ...

In the middle of the prison stands a kind of monument to the memory of all those poor Vietnamese who suffered the worst atrocities of their executioners French. People gather here and burn a stick of incense. And then the tour continues. We'll explain that the Vietnamese took possession of the premises to accommodate American drivers stopped during the war.

"Welcome to the Hoa Loa Hilton! "The first GI entered it in 1966 to come out in 1973, alive! There is much talk here of John McCain pilot whose plane crashed in flames in a lake. The nice Vietnamese jumped into the water to save the drowning and incarcérèrent Hoa Loa. We still kept his clothes here driver of the U.S. Army. Vietnamese authorities explain with great fanfare evidence they wanted to treat "humanely" American prisoners to make them understand that they were wrong to throw millions of tons of bombs on a people whose kindness and gentleness were legendary.

I repeat: That is the Vietnamese version! We see the guards give gifts to American prisoners when they leave prison after the Paris Agreements in 1973. Y'en maybe even who refused to leave their homes and stay at Hoa Loa: there was so much pampered! I came out of this "chaff" taking a big breath of air pollution. I prefer the street noise and silence macabre and sinister dark jails Hanoi.

Currently, I am writing something that serves bus that transports us to Ninh Binh. Rice fields pass before my eyes ... When you think everything has been destroyed, napalmisé, bombed and defoliated there is a little more than thirty years one still wonders why the French and the Yanks came to their law here.